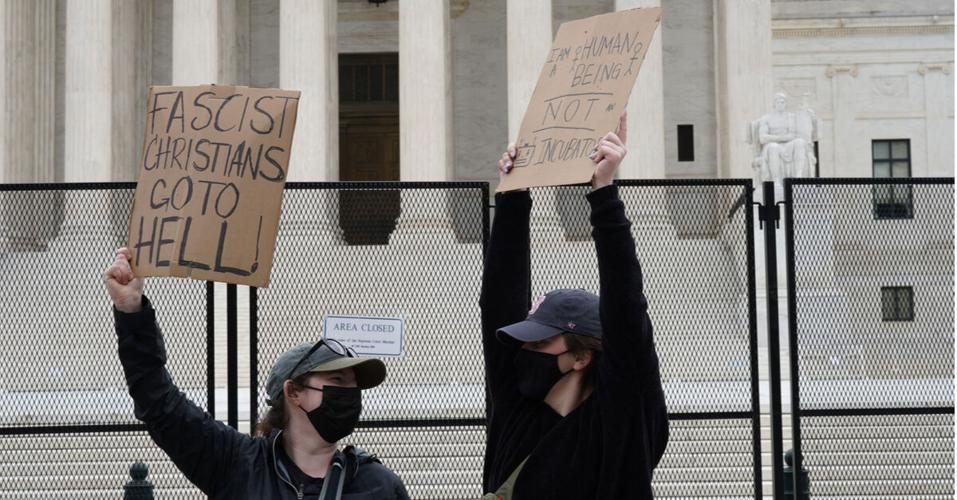 Washington, DC – May 08, 2022: Protesters at the Supreme Court demonstrate their views in support of the court upholding Roe v. Wade in spite of courts recently leaked draft opinion. 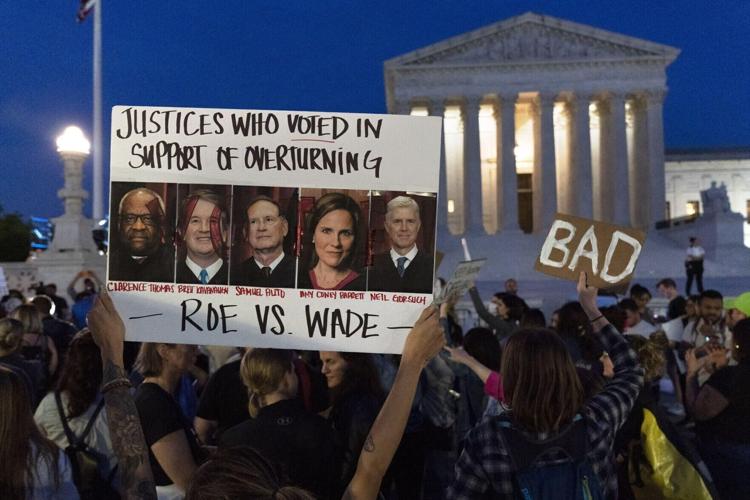 Nikki Tran of Washington, holds up a sign with pictures of Supreme Court Justices Clarence Thomas, Brett Kavanaugh, Samuel Alito, Amy Coney Barrett, and Neil Gorsuch, as demonstrators protest outside of the U.S. Supreme Court, Tuesday, May 3, 2022, in Washington. A draft opinion suggests the U.S. Supreme Court could be poised to overturn the landmark 1973 Roe v. Wade case that legalized abortion nationwide, according to a Politico. Whatever the outcome, the Politico report represents an extremely rare breach of the court's secretive deliberation process, and on a case of surpassing importance.

Last Sunday had to be one of the most oxymoronic days in the history of our great country.

If you would have checked social media sites, you would have noticed hundreds to thousands of tributes to mothers everywhere, past and present, from coast-to-coast, black and white, old and young.

After all, Mother’s Day just seems to be the one holiday that brings out the true sentimentality of almost everyone. I mean, who doesn’t love and cherish their mother, or the memory of her?

For me, unfortunately, it is now only the memories and pictures, since my mother passed away March 23, 2019, after a short battle with pancreatic cancer. And as I learned when I became an adult, my mother had to undergo some rare type of surgery in the late 1950s to be able to get pregnant a third time, in order for me to exist, after my sister and brother were born 12 and eight years earlier, respectively.

Because she just wanted a third child that much.

The way I look at it, my mother did everything she could for me even in the years before I was born, right up until the terrible day I had to tell her that she was terminally ill. And then I tried to do everything for her.

If you have ever cared for a loved one in their final weeks and days when they are dying of cancer, you would know what I mean.

On this same Sunday, also from coast-to-coast, there were dozens of organized “protests,” if you will. Thousands of people were saying and chanting mean, nasty, vile things such as “I want to kill babies!” And I presume all of these protesters at one time had a mother, and probably most still do.

Now, I am not here to debate the toxic issue of abortion.

And I will not.

It is the lone topic in America (even more than politics and religion) which is almost untouchable at a dinner table or at any social function for the passion it brings on both sides. If you want an argument, just bring up whether abortion should be legal, then stand back and watch and hear the people around you go at it.

What I am here to do is to point out the hypocrisy and utter nastiness, along with unmitigated violence and hatred, that a segment of our society perpetuates every time something in this country doesn’t go exactly their way.

Almost from the moment a video was released of a Minneapolis police officer kneeling on the neck of a black man named George Floyd outside a convenience store, our city streets from New York to Philadelphia to Chicago to L.A., became ground zero for protests.

There were violent protests. Bloody protests. Assaults and batteries. Fires set. Looting of almost every store in sight.

At some point, at least in the old days, protests become riots and were labeled as such. And they were not tolerated by law enforcement, or subsequently by district attorneys. But those were the good old days. The transition in terminology is not made these days.

During 2020, local police were largely given “stand down” orders as the media reported “mostly peaceful protests” over the “brutal, unjust killing of an innocent man named George Floyd.”

As if it the uncaring actions of an officer named Derrick Chauvin in Minneapolis had anything to do with the legality to loot a store in Los Angeles. Or burn a police car in Philadelphia. Or beat an elderly man walking down the street in Chicago.

Get this: 25 people died in those protests, which caused almost $2 billion in damage, according to the most recent estimates.

All that as a result of one unjust and subsequently prosecuted killing of a citizen by a police officer, who was tried and convicted and sentenced to 22 years in prison.

Of course, it isn’t.

The same thing is happening these days on our streets and in our politics. Within minutes of a leaked document related to an upcoming U.S. Supreme Court ruling, which claimed the highest court would overturn the 1973 decision from Roe v. Wade sometime later this year, civil discourse halted and chaos sprouted its ugly head yet again.

Let’s set aside the issue of the court’s decision, if it follows through and ultimately makes the states responsible for deciding the legality of abortion and what will and will not be law instead of the federal government doing so.

Let’s just look at the reaction instead.

Sunday morning, a protestor tossed a Molotov cocktail into an office of Wisconsin Family Action, a pro-life group. The exterior of the building also was tagged with the statement: "if abortions aren’t safe then you aren’t either."

Many on the left cheered this action. And that about sums it all up.

For example, a reporter for Rewire News Group called for "more" violence against pro-life Americans, re-tweeting the New York Times story on the Molotov cocktail. "More of this. May these people never know a moment of peace or safety until they rot in the ground," Caroline Reilly tweeted.

“Whether you’re a ‘Catholic for Choice,’ ex-Catholic, of other or no faith, recognize that six extremist Catholics set out to overturn Roe,” the group tweeted. “Stand at or in a local Catholic Church Sun May 8. #WarOnWomen #MothersDayStrike.”

But the worst was yet to come.

The protesters not only decided to publish the addresses of the conservative justices on the Supreme Court, they held protests on their streets and on their front lawns. They shouted obscenities and issued threats to the justices and their families, which include young children.

Sadly, but yet predictably, there were the usual suspects and politicians egging them on, just like in 2020. The Chuck Schumers, AOCs, Nancy Pelosis and yes, even our spineless president, and many more, were cheering them from the front row of the D.C. bleachers.

On the day of the SCOTUS leak, Senate Majority Leader Schumer stood on the steps of the court and said these words: “I want to tell you, Gorsuch. I want to tell you, Kavanaugh. You have released the whirlwind and you will pay the price! You won’t know what hit you if you go forward with these awful decisions.”

Wow. That sounds like a legitimate threat to me. Or an act of inciting threats by others. Isn’t that what made the left so upset about Jan. 6, 2021?

Later, Schumer called the content of the document—not the leak of it—an “abomination” and claimed Republicans will now seek to strike down citizens’ right to “gay marriage” and “interracial marriage.”

Talk about stoking the fires before they ever burn.

And this from Pelosi on Monday: "While we have seen and heard extraordinary anguish in our communities, we have been moved by how so many have channeled their righteous anger into meaningful action: planning to march and mobilize to make their voices heard."

The problem is, and has been, that their righteous anger is not directed at an issue or a philosophy, but it is taken out on the people who believe differently than they do. It is a righteous anger accompanied by threats and violence and threats of violence.

Then the hits just kept coming. This is a tweet Tuesday from Chicago Mayor Lori Lightfoot: "To my friends in the LGBTQ+ community – the Supreme Court is coming for us next. This moment has to be a call to arms. We will not surrender our rights without a fight—a fight to victory!"

A call to arms? Again, President Trump did and said less on Jan. 6 than that statement right there.

Lightfoot’s crime-ridden city, which annually tops the country’s major cities in fatal shootings, has displayed a call to arms for years under administration. The criminals’ call to arms, that is. You think she would be searching for answers to that problem, where innocent children and young adults die every week from random gunfire.

Given the opportunity to issue a statement to these protestors to not threaten justices or to show up at their homes in a physical form of intimidation, President Biden’s spokesman Jen Psaki passed, saying only, “The president appreciates their passion.”

Sure, he does. Given such nonsense, then the left should have appreciated the passion of those Jan. 6 protesters who stormed the Capitol, too, instead of prosecuting it. But we know otherwise.

You see, the left and their politicians want it both ways. They want to toss into prison those opposing their viewpoints and those who have broken windows and stormed their house of lawmaking and the few who assaulted police officers and, yet, celebrate and cheer those on their side doing the exact same thing on our streets.

Finally, Monday morning, Psaki said the president “condemned” protests and threats outside the justices’ homes. Of course, this came after they already happened.

When reminded that some of the SCOTUS justices whose houses were targeted had young children inside, Psaki added, “I think our view here is that peaceful protests — there’s a long history in the United States in the country of that. And we’ve certainly encouraged people to keep it peaceful and not resort to any level of violence.”

Yep, the leaders on the left have “encouraged” protestors to keep it peaceful alright—just like they did in 2020’s “Summer of Love.” The only thing missing this time around is the backdrop of burning buildings … thus far, that is.

Jeff Snook, a 1982 Ohio State graduate, is a guest columnist for The Ohio Press Network. He has written 14 non-fiction books, including 12 on college football and resides in Atlantis, Fla., and Mifflin, Ohio